24 Sep Let’s Kick Off the Fall Season with a DJ Pasha Dance Party!

Posted at 00:01h in Uncategorized

Posted at 15:56h in Uncategorized

Posted at 16:17h in Uncategorized

29 Dec Your Happiness, Our Smile

Posted at 17:58h in Uncategorized

With another great year coming to an end we get to reflect on all of our beautiful couples we had the opportunity to work with. For each and every couple we made the time and effort to get to know who they are. Every couple and every wedding is an opportunity for us to create an experience as unique as their love story. When our DJs and Coordinator sit down with our couples we specifically want to learn what is important to them and  their top priorities to please themselves, their families, and guests. The big advantage by booking multiple services through DJ Pasha Entertainment is the trust, confidence, and quality we are known for. And we are proud to say each of our team members are in sync with your event, customizing every detail to your timeline, theme, dress code, and color story. We want to arrive early, stand proud, and look out and see your happiness!...

Posted at 23:47h in Uncategorized

The DJ Pasha Summer of Love Tour returned to the Temecula Valley Balloon & Wine Festival for 2 Nights in 2018. After many years of working closely with the producers owner DJ Pasha created the After Party Experience. A chance for thousands of Festival goers to end their day dancing to the Intoxicating & Energetic show from DJ Pasha. Every year the After Party crowd grows bigger and so does the show 1 DJ has created. DJ Pasha connects with his crowd through music, excitement, and a custom explosive mix for all to lose themselves. No connection is greater then being asked to perform personally as a surprise gift to a Birthday Girl who has said "DJ Pasha is the BEST DJ I've ever heard!" Working together with Melissa's Husband Brian DJ Pasha organized a Surprise 40th Birthday Party like no other. Whether it is 25,000 people or 100 guests you will receive the biggest show of your life. Here is what Melissa's Husband Brian had to say to Promoters involved about his Festival and Personal DJ Pasha Entertainment Experience: "I just wanted to take a moment and compliment someone that has appeared at the last year's festivals. My wife and I were introduced to the festival in 2017 and could not wait to get back in 2018. Once again, we had a phenomenal time and we really look forward to next year's event. Each year our group size grows and next year will increase as well. It is a fantastic event and very well done by all who put it together. Around the time of this year's festival, I decided that I would throw my wife a surprise birthday party. Each night, we would finish the event at the wine stage where DJ Pasha closed down the festival (a special request would be to allow him to stay later if possible!). My wife commented on how great the DJ was so when I went back to work on the Monday after the festival, I looked up DJ Pasha to see if he could handle our surprise birthday party. I figured that your event was so large and had so many people that our 80-90 person party might not be large enough. Well, I was surprised and he had no problem accommodating our request. Throughout the entire process he was beyond professional, helpful and did an amazing job for the party. We considered... 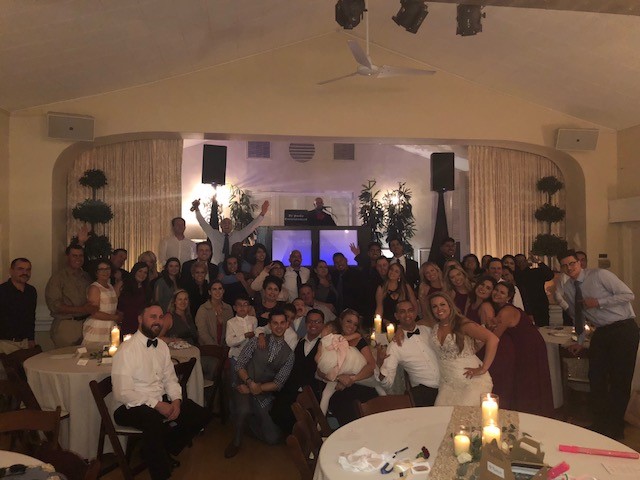 Posted at 00:26h in Uncategorized

My husband and I got married April 28th and I have to say it was the most amazing day! We owe an enormous thank you to DJ Pasha because he truly got the party started and kept it going throughout the night! All I remember is being on the dance floor the entire night and that is what I had envisioned for my wedding reception. From the very beginning Pasha was very quick in getting back to us and discussing exactly what we wanted for our reception. He was also very kind in working with our tight budget. After meeting with him we felt that we were in great hands! He listened to what we wanted to play and I heard every song I requested while on the dance floor. Our guests had such an amazing time and all the vendors that took part in our day had nothing but great things to say about working along side him and his team. My husband and I are truly happy we chose Pasha to be a part of our day and wish we could do it all over again! He is very professional, kind, and I am so happy with our decision! Thank you Pasha you are truly THE BEST! We also had the pleasure of having Teresa as our wedding coordinator and it was the icing on the cake! She was the one who introduced us to DJ Pasha and helped us gather an amazing group of vendors. From the beginning she was available for any questions or recommendations. She always made time to speak with me and go over details of the wedding to put my mind at ease. I am so thankful for her and her expertise because our day ran smoothly. On the day of the wedding she took care of everything for us and I did not have to worry about a thing. She was always very calm and reassured me that everything would turn out great and it truly did! I am sad that it is all over but I am so happy I was able to have her and Pasha be a part of the best day of my life. My husband and I are so grateful! Thank you! -Chelsea and Ramon Chelsea and Ramon, on behalf of myself, our team and BestFriendEvents, we are so thankful to have been your choice in creating your...

Posted at 22:04h in Uncategorized

There are allot of reasons why we love sharing Good Music and Vibes, BUT receiving texts like this screenshot is truly our #1 Reason. When Fans, Friends, and Family thank us and tell us how good they feel from our mixes and the impact it has made it means the world to us. No matter where you are or what you're doing music can set you free, realign yourself, escape, feel young & beautiful! Owner DJ Pasha thanks you for listening and will continue to share as much as he can from the road. Some other important reasons we release mixes for our Couples and Clients: You can hear your DJ and see they actually mix and build energy while telling a story. You can experience a skilled Master of Ceremonies that is clear, direct, and fun working hand and hand with the music and event happenings. On our Website and on our DJPashaEntertainment Mixcloud pages we have created a New Radio with hours of new artists and styles from around the world. Where else can you hear, see, and feel your Entertainment Investment? There is a reason why for 20 Years we have not stopped! ...

Posted at 00:35h in Uncategorized

For over 6 years DJ Pasha Ent. has provided entertainment for and worked together with the Temecula Valley Balloon and Wine Festival. For the last 2 years the element of having a party DJ at the festival created a completely different vibe. In 2016 festival promoters and DJ Pasha had a meeting to increase the visibility and presence of the DJ. DJ Pasha came up with the concept of a After Party for Friday and Saturday nights. With thousands coming to Temecula from all over filling the camp grounds and local hotels this would allow a safe atmosphere and a huge party to look forward to! On Friday June 1 and Saturday June 2, after the beautiful Hot Air Balloon Glow show and the evening's main stage act come dance the night away with DJ Pasha for both nights. DJ Pasha will also be kicking off the Festival opening the Main Stage Friday night with a rocking set to welcome Safety Orange, Spin Doctors, and Sugar Ray live on stage. Get your tickets now at https://www.tvbwf.com/ to the Summer's Biggest Festival featuring: Wine tasting, Beer tasting, shopping experiences, food pairings, Hot Air Balloons, and the Energy of DJ Pasha. See you at the 35th Annual Temecula Valley Balloon & Wine Festival!...

Posted at 23:55h in Uncategorized

When planning a wedding we believe every couple and family are completely different and that is how we make your Wedding Special. When we meet with couples one of our first questions is “What is important to you both?” With our 20 years of experience, we want to share thoughts and ideas. We do not tell couples what they need to do, we listen. For D’Veon and Veronica it was extremely important to them to connect both family and culture from both sides. Their DJ and Master of Ceremonies was DJ Pasha. The three of them went through many ideas to combine a First Dance like no other! Our Groom really wanted to show his new bride’s family that he has embraced their Latin roots. DJ Pasha collected the songs they wanted to incorporate and recorded different blends and mixes for the couple to practice their big dance. The couple would send him video of their routine so he could capture the feeling second by second. DJ Pasha and our couple decided on a slow Bachata remix featuring Usher to open the elegant dance. Then as a surprise DJ Pasha would mix in a high energy salsa selection and the Groom would through off his jacket and spin his new wife around. Day of the Wedding Master of Ceremonies DJ Pasha had every guest surround the dance floor in anticipation of our Bride and Groom’s entrance. Our Bride and Groom began their First Dance with sensual ease and when the salsa song came on and the Groom’s jacket went flying into the crowd every guest began dancing around our beautiful couple! These moments of personalization, fun, and involving every guest is DJ Pasha Entertainment Spinning Your Day Your Way!...

03 Apr Every Detail Taken Care of For US

Posted at 20:33h in Uncategorized

Teresa, her assistant Desiree, and Pasha truly made our wedding perfect. They completely controlled the details of the day, allowing us to relax and enjoy ourselves. We could not have done it without them! Every detail was taken care of for us - all we had to do was show up and they took care of the rest. I especially appreciated the special attention paid to the needs of our families. - Kelly...